Today was Prinsjesdag, the annual occasion on which the King (or, formerly, Queen) travels through the inner city of The Hague – from Noordeinde Palace to the Binnenhof – to hold his speech before parliament, and open their session. You might think he’d just take his bicycle cause it’s not far or anything, but oh no this is a King!, so this is a serious and big occasion: He and his wife travel in the Gouden Koets (golden carriage) in this whole procession of men in big hats and funny costumes and drums and trumpets and very many horses, while mostly quietly happy people (some of whom dressed in orange) line the streets and gun salutes are being fired far away over the Malieveld. Good times.

Along with a bunch of type]media peeps, I headed towards the route around lunchtime too. I was pretty excited to get a glimpse of an actual king (the concept being very foreign to this Swiss person), especially after the experience of watching his inauguration earlier this year live on TV – something I thought I’d never do; but I was captivated by the sternness of the affair, the 200-year-old ermine coat the new king was wearing, and a summoner banging his staff on the church floor, which echoed into the silence, and loudly announcing: “de koning!” – I still get shivers. (And for the record, I really see no harm in appreciating occasional ritualised demonstrations of old-worldly power. There are other powers now that are sneakier and that I fear far more.)

People here sure seem to be liking their king; the streets were packed, and as the Gouden Koets was passing (I got a vague glimpse of humans inside) there was a little bit of shrieking, and also some waving of scrawled banners – but those turned out just to be wishing the “Super Royal Couple” a great start. I find it fascinating to observe the peculiar mixture of the usual Dutch sobriety and unfazed orderliness with the gilded flourishes of their monarchy. Historicising pomp, funny hats and golden carriages are not necessarily things I’d have imagined to fit in well here; on the other hand, the stepladders (pictured below), the relaxed quietness of the crowd until just before the golden carriage appeared, the subdued little shrieking, and the bustle with which the crowd disappeared back to work as soon as the king had passed aren’t something I could imagine anywhere else – and in a strange way, it all works beautifully. (Yes I do like this place.) 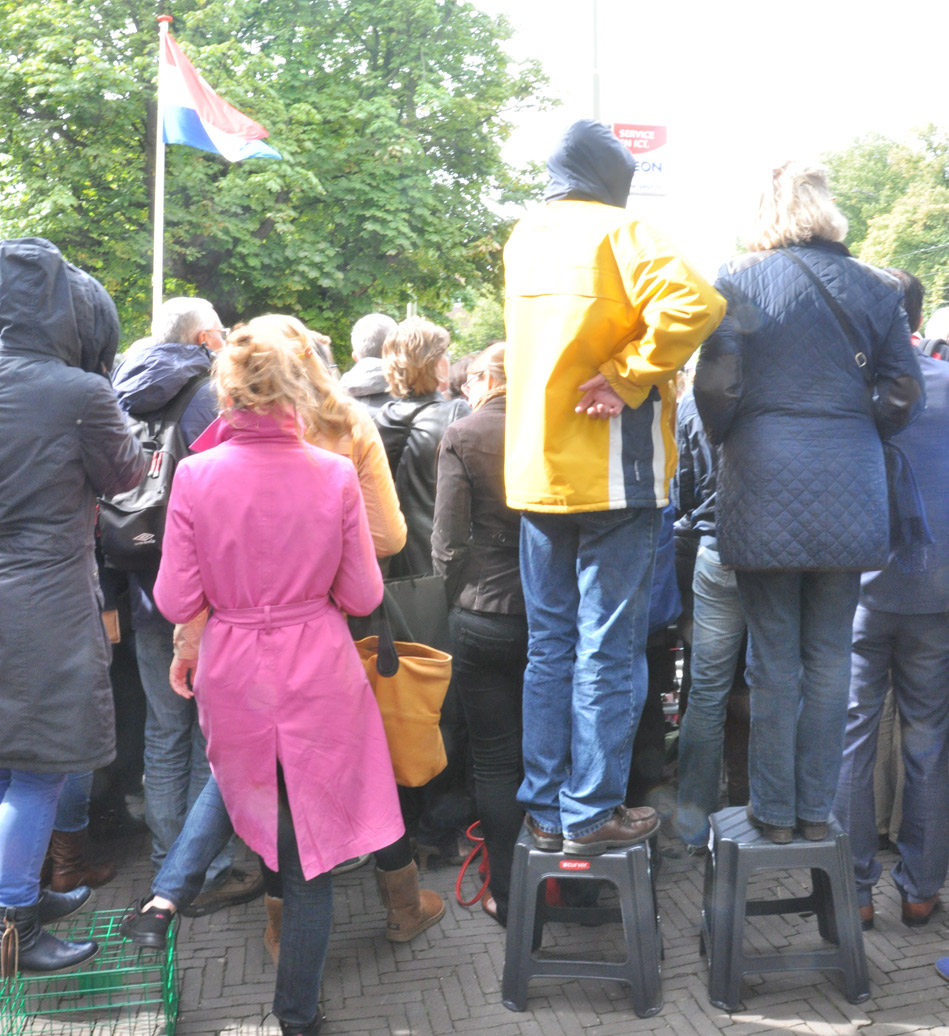